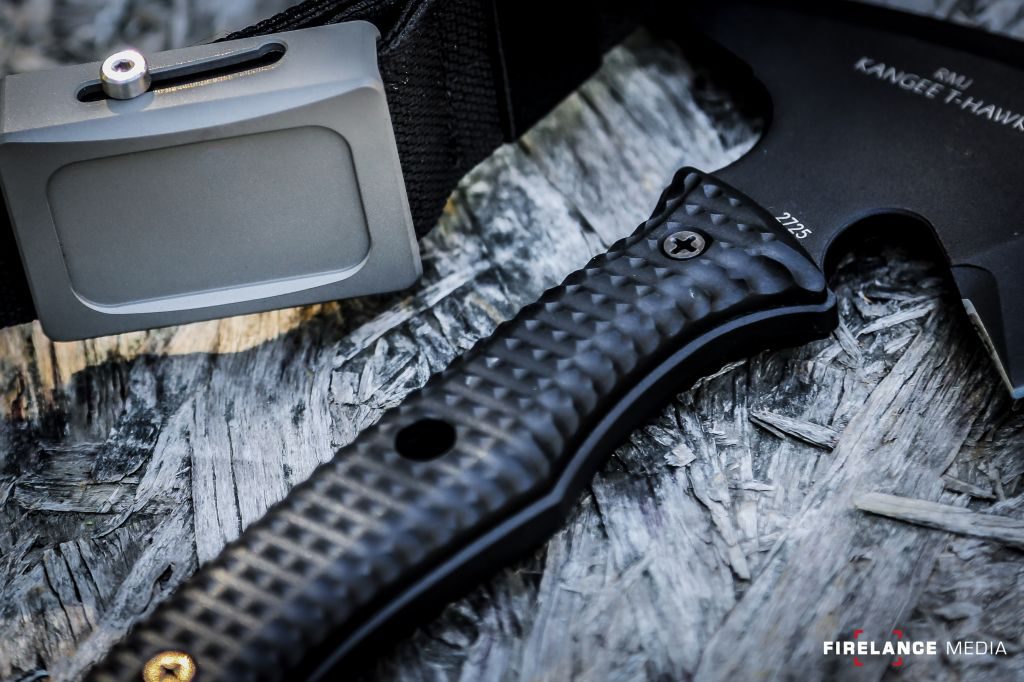 From the Ares Gear webpage: “The Aegis belt (released 2013) is one of our newest designs; customers wanted a belt with the same performance as our Ranger belt, but a simpler “look”. Like the Ranger, the Aegis is 1.5″ wide, and is composed of 2 layers of the same proprietary scuba webbing (3 color choices). The Aegis buckle is beadblasted stainless steel (weighs 4oz).”

I got my first Ares Gear Ranger belt from them after SHOT SHOW 2013, then immediately ordered another Enhanced Ranger when I realized how inferior all of my other belts actually were. Besides my Danner duty boots, I have never owned a piece of gear that I have worn more religiously than the Ares Ranger.

So when Jake Sebens, owner of Ares Gear offered to send me one of the new Aegis Enhanced belts to T&E, I was pretty pumped.

I had seen the pre-production units on a few close industry friends and really liked the simple, understated appearance of the new buckle.

In the picture above, Kerry Davis from Dark Angel Medical is seen wearing the Ares Gear Aegis with a custom engraved buckle.

For those of you that have seen the Ares Ranger belts, they use the COBRA buckle that functions perfectly, but tends to scream “I live my life outdoors.”

In contrast, the Aegis is wonderfully subtle with the machined stainless steel buckle. Mind you, this first iteration of the buckle was a limited run and Ares will be moving to a MIM (Metal Injection Molded) buckle in the production units around the beginning of the year. MIM will mean equal quality to the machined buckle but with better quality control. The standout feature of this belt is, of course, the stiffness that Ares belts are known for. The scuba webbing used in this belt is the same as the Ranger so if you used that in the past you know of which I speak.

If not, here is a picture I took of the Aegis wedged in a concrete block wall. 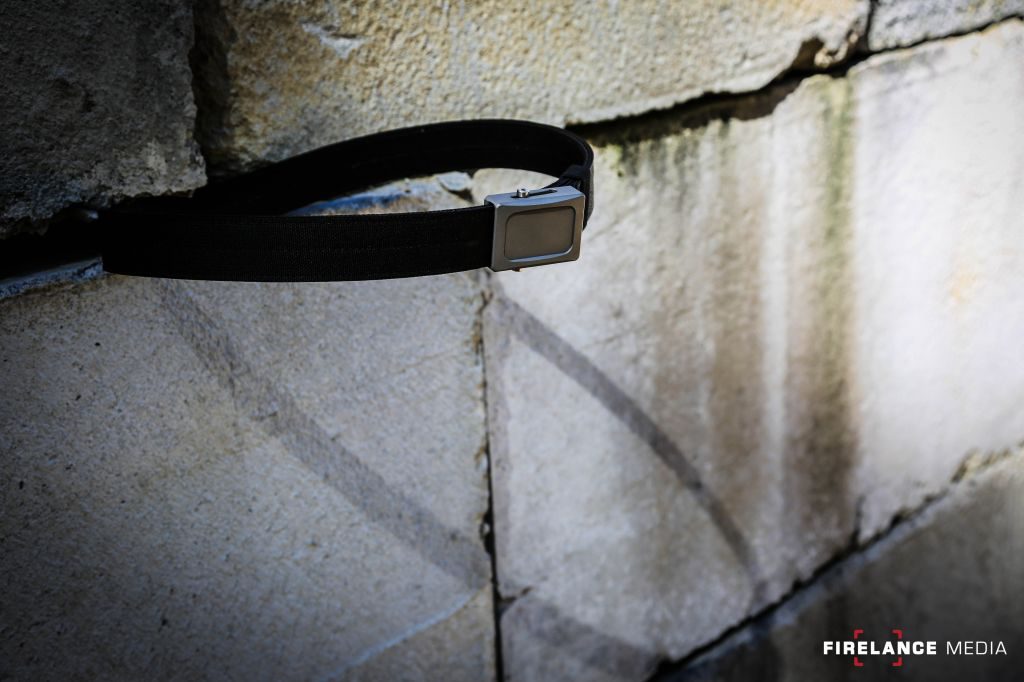 The stiffness is apparent

Note that there is barely any flex at all. So what?

What this means is that when you load your belt down with your IWB/OWB holster, maybe a medkit, some pouches or whatever it is you carry, the belt will keep its shape just fine and keep your pants in place where they are supposed to be.

Continuing with the comparison to the Ranger, there is no need (nor ability) to take the buckle off of the Aegis in order to thread it through pant loops. This is your “normal” type of belt with the legendary stiffness you’ve come to expect from Ares. With the Ranger, you have to detach one side of the belt buckle, thread the belt, then reattach the buckle. It’s great because you get a very secure fit, but can be a pain if you forget at the end of a long day and try to just rip your belt off. It never really affected me at all, but for ANY piece of kit out there, someone will complain about something. 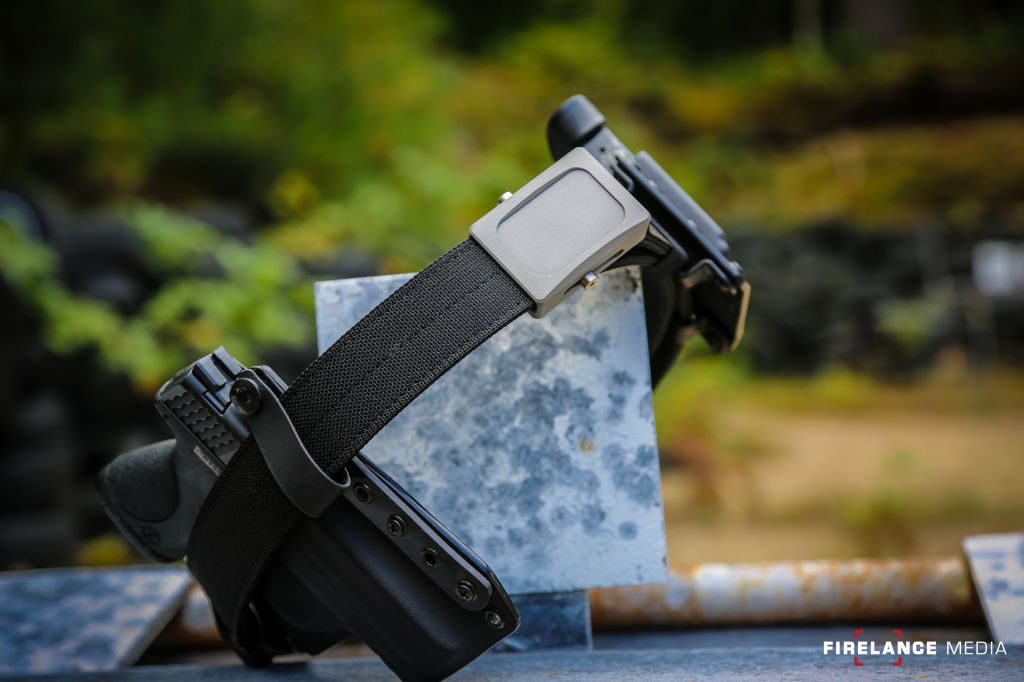 As for the buckle itself, once you thread the end through the buckle and out the front (as opposed to the “thread behind” Ranger), the cylindrical clasp clamps down tightly and doesn’t let the belt slip at all. Time to take it off? Just move the tabs of the cylinder backwards, and the whole thing comes loose. I can’t believe I’m walking you through the process of buckling a belt but I want to emphasize the ease of use for a belt like this.

BE SURE to heed the sizing recommendations on the site. These belts are different from the Ranger so pay attention, otherwise there is no one else to blame but yourself. Everyone is going want a different fit, but personally, I wear a Size L Ranger but the Medium Aegis fits me perfectly. I fluctuate between a 34-36″ waist depending on the time of year.

I’ve worn this belt now for several weeks and it still looks as good as the day I got it. I have worn it with both formal and casual outfits, to weddings and gun ranges and it is not out of place at all. By no means is that a torture test, but I have also worn Ranger belts daily for 8 months and those also are barely worn-in. These products are made to last.

With the colorways that Ares creates being available for the Aegis (3) and the Aegis Enhanced (8), I can see this thing selling quickly.

Big thumbs up for this belt. Great job, Ares.

The Aegis and Aegis Enhanced belts are both available for pre-order on the Ares Gear website.

Video from Day 3 of Bullets and Bandages, a specialty medical and…

0 Comments on "REVIEW: The Aegis Belt from Ares Gear"