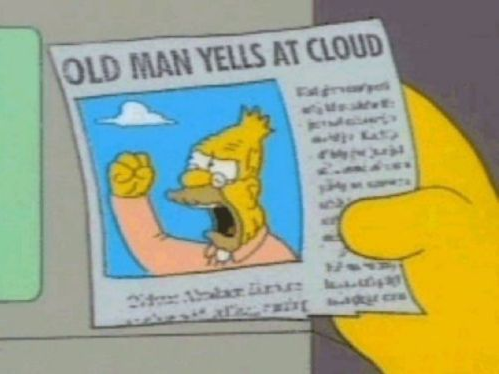 Drones are great. The government is the old person shouting at clouds.

A friend sent me this link to a Lakemaid Beer ad that shows the small company using a drone to deliver beer to ice fishermen.

SWEET! Who doesn’t want to get a frosty one delivered to your shack in the middle of nowhere?
The FAA. That’s who. The Sky Overlords have already instructed the company to stop, citing the fact that drones are not to be used for commercial purposes.

My point here is not that the government is wrong for having overreaching regulations (that’s a whole ‘nother topic), and I can see where unregulated drone activity could be bad. But in the absence of cohesive standards, they just want to shut it all down: Stifle creativity. Stop progress. Clamp down on innovation.

If they never used social media, would the FAA have ever known? Probably not. Is a company like Lakemaid going to have armies of drones delivering suds cross country? Of course not. They embraced technology, both physical and social, pushed the envelope and are getting burned for it.
That is EXACTLY why small business should NEVER stop doing this sort of thing. It is the only mindset that will help America grow again.
Better start telling companies like wedding filmmakers, extreme sport athletes… Hell, even Redbull to stop using drones. Someone might enjoy what is being produced. (I know imaging is a different story, but you catch my drift)

Go back to watching Matlock and drinking your Ensure, FAA, the world is obviously moving too fast for you. Naptime is at 2.

The First Year in Review

4 Comments on "FAA grounds Beer-Delivery Drone, then Yells at Cloud"