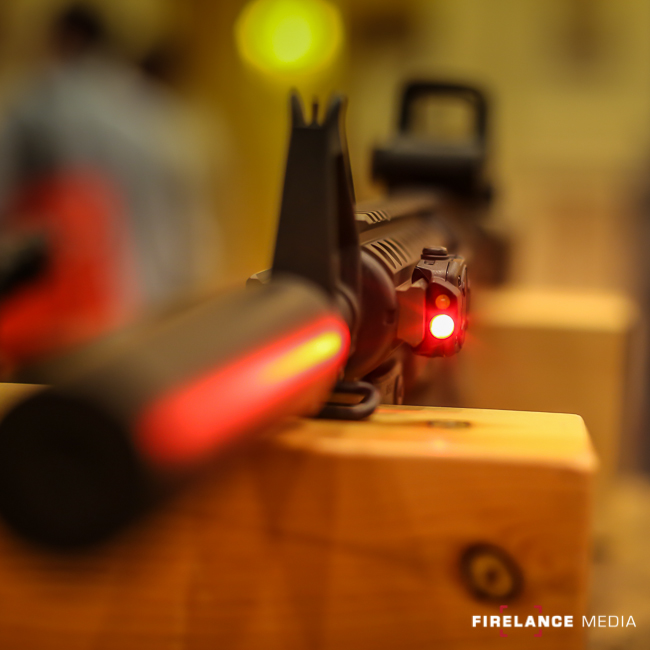 There’s something to be said for stumbling upon a company that instantly gives you what you want without the heavy handed marketing push of large corporations.

At SHOT Show 2014, I was given a generous amount of time from George Chevalier, Marketing Director and Communications Manager for the Trenton, NJ based manufacturer Princeton Tec who walked me through their latest offerings.

I’ve been looking for good alternative lights for my gear that are not designed to be used ONLY when shooting. I want to be able to use this stuff year round in all conditions on all sorts of equipment.

However, it IS SHOT Show. One of the items that I saw in the booth quickly became one of the products that I was bringing my friends over to see. It is the extremely low profile Switch Rail light. Younger sibling of the current Charge MPLS helmet light, the Switch Rail has recessed LEDs that provide 10 lumens of task lighting for your weapon or helmet or anything with a rail. I checked out the Red/White light version and could instantly envision this on the support side of my rifle or up on my helmet, or both.

The Switch Rail from Princeton Tec

So listen, at around $50 MSRP, this is not an ultra bright light (Hell, it’s 10 lumens, right?) and it is never going to replace my SureFire Fury as a primary weapon light. However, the Switch Rail is small enough and slim enough that it will not be overly obtrusive on your weapon platform and will allow me to get some light in situations where the Fury would be WAY too much illumination. It’s also at a price point where you can get several and keep them on all of your rail mounted gear.

The second product I enjoyed playing with was the Vizz headlamp. Packed with 150 lumens and powered by 3 AAA batteries, this is going to be my next all purpose headlamp. Biggest pluses for me were the one button operation as well as the dimmable option and lockout mode. Available in multiple colors, the Vizz is great for anyone that adventures outdoors, or needs some additional indoor task lighting.

The Remix PRO is geared towards the military or folks that want military grade hardware. Sturdy enough to stand up to most anything, the Remix pro runs on a single C123 battery. It weighs in at about 66 grams, about 2/3 the weight of the Vizz, and provides the user with 125 lumens.

With the lighting world being crowded these days, Princeton Tec is focusing on what they do well, making great products, and are getting due attention from serious enthusiasts. Really glad I had the chance to stop by the booth.

For more information on the entire line from Princeton Tec, please visit their website at http://www.princetontec.com/

Who doesn’t love a good internet fight? In my Sunday morning/post-hangover/coffee-infused Facebook…