Why You Don’t Deserve That Free Product 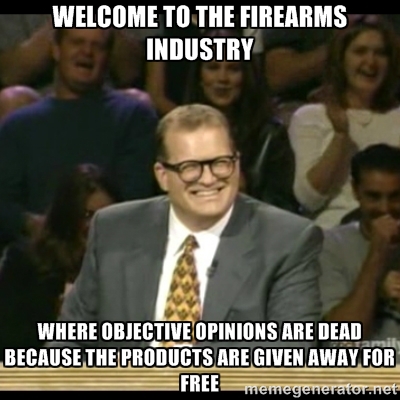 After seeing the crowds at SHOT SHOW, and what appeared to be an influx of “new media” types, I felt compelled to write this article despite the fact that I will probably be ostracized by my own peers for being an elitist douchebag. Interested? Read on.

I come from a scientific background. My dad taught science for 40+ years, I got a science based degree in Physics, and both of my sisters are in the medical field (that doesn’t mean anything but I needed something to write after the second comma).

I take pictures of gun related things. I make videos. I’m a 41 year old man that has been involved in technology and hobby-level testing since the mid-80s, before a lot of the “new media” guys were born. I started doing internet radio before there were even iPods and the term podcasting. What does that qualify me for? Abso-fucking-lutely nothing.

My approach to this industry is perhaps a bit more passive than others, and thereby potentially standoffish. My goal with Firelance Media is to build a reputation of doing good things for good people, provide quality work, pay my dues despite my incessant ambition for large scale success, and especially respect those that have come before me. Oh, and I don’t do it for free, but that’s a whole ‘nother rant.

I do not ask for free product from manufacturers, do not perform giveaways in order to boost social media driven Insta-fame, and certainly do not feel entitled to ANYTHING. I pay for what I have. Admittedly, every so often, a manufacturer or a client or a friend will send me a product because they appreciate my work, or because they trust that I will give them honest end-user feedback. They do NOT involve me in the R&D process because I am not qualified to do so in their field. And that is the way it should be.

But this is an industry unlike any in which I have ever been. The sense of entitlement that I saw from people wearing media credentials at SHOT was appalling. “I have an iPhone and an Instagram page where I predominantly repost pictures that other people have taken….send me your rail and your sights or this entire firearm so I can T&E your products and I’ll help grow your brand.”

This is the equivalent of creating a YouTube channel where you collect and republish all of the existing commercial advertising for Nissan and then expect them to give you a new Pathfinder.

(Can you feel the anger growing?)

When you say you are going to “test and evaluate” a product, what credentials can you offer to justify anyone NOT bashing your head in? Do you have a degree in metallurgy where you can debate the pros and cons of a specific barrel’s chemical makeup? What happens to accuracy as temperatures pass a certain threshhold? Do you use control groups to set baselines in your studies? Are you removing any variables that might influence perceived feel when conducting an experiment? Do you step through the scientific method in order to isolate a specific result? Were you a world champion competitive shooter with millions of rounds downrange that can offer constructive criticism on sight pictures? Have you spent your life in the military at the highest levels where gear reliance is a matter of life or death? Most likely not.

Let’s use an example:

Blogtard Jim is going to “test” a rifle that he “built” with some new Wonder Part that he got free. He may even “torture test” it by running many hundreds or even thousands of rounds through the gun. What is the expected outcome? What is actually being measured? How are those tests accomplished?

BJ (for short) does an incredibly longwinded tabletop “unboxing” of the Wonder Part, and then after 20 minutes of bloviating goes out to “the range” (his backyard) and shoots a 30 round mag as fast as he can through the rifle then turns to the camera and says “Wow, this thing shoots soooo flat….no problems at all…THIS is the rifle to get”. Yet he does not have the least bit of understanding of WHY the rifle shot flat…was it the muzzle device? Was it the measured rearward pressure exerted by his arms? Downward pressure by his support hand? What about the mass behind the gun providing recoil control? Ammo? Spring tension?

Do you see where I am going with this? I’m pretty sure his excitement is just due to the fact he didn’t pay for anything.

Let me be clear: There are people in this industry that are users of products that have such long and varied histories behind the gun that they ARE subject experts and SHOULD be used to evaluate the efficacy of a specific product or platform. Pat Rogers, for one, does extensive real-world testing of BCM products by using them in his classes under all conditions. He can provide specific feedback based on a lifetime of experience. That’s a guy I trust.

The fact that you got a GoPro4 three months ago does not even put you on the same planet as that man.

Some will argue however, that I am a curmudgeon about these things; that I don’t “get it” and that this is how marketing is now being done.

What is being done in the industry today is no different than trading lunch snacks on the playground in grade school, and what’s worse is that manufacturers are buying into it.

Listen, manufacturers NEED to push products out to people that they trust. Seeding a small amount of inventory is core to gaining publicity. “New Media” guys doing marketing for free is just a bonus on their bottom line. Social Media driven organizations are creating metrics around page views and are developing models based on Likes, but that is a house of cards built on an unstable platform. Companies SHOULD give product to PROVEN individuals that have sufficient backing and credibility to evaluate a certain aspect of the item. Giving a holster to a guy that is a 9-5 IT manager with a YouTube channel on the side is NOT the same as putting a holster in the hands of someone that has been a gunfighter for 20 years. Those are the guys I will listen to because they are providing an opinion based on years of experience.

More importantly, Media in the classic sense is meant to be unbiased. The “new media” crowd is not approaching their reviews in such a way that aligns with that philosophy. This new parasitic approach is to promote a brand with SELF-SERVING interest. Saying that you will promote XYZ Product on your YouTube page is, at it’s core, a self serving approach and to deny that is foolish. You are trying to increase the number of followers that YOU have by trying to be seen with the new, cool brand so that you can increase revenue for yourself. It is not in the best interests of the manufacturer. Especially if your review winds up misstating the facts of the product, potentially damaging the perception of the product that the manufacturer has spent a LOT of money trying to create and market. The only exception is where the manufacturer is a CLIENT of the creative, and they have a financial arrangement. But once again, it can’t all be $Free.99

Sadly however, we see this all the time with brands and “internet personalities” all bonding together to promote one another, driving up likes and views and IG doubletaps but to what end? Is it truly driving revenue? Can the ROI be measured? Or is it just a bunch of gear-whore gun dudes handing stuff around to each other in a marketing circle-jerk deluding themselves into thinking they are doing something positive?

Some would argue that it is a case of small businesses helping small businesses. OK. But at what point do we forget the fact that we are all in this game to make money and that finances cloud objectivity? I have yet to meet a patently altruistic member of the gun industry.

So where do we go?

I would love to see a body of individuals come together to provide the Consumer Reports of Gun and Accessory Reviews. Unbiased, impartial, scientifically based evaluations of products and their capabilities.

Have an easy-to-understand rating system for the quality, functionality, durability, price, and overall value of an item. Compare several brands in the exact same types of tests so that there are baselines for results. We use that type of research when buying a washing machine, why not for firearms?

Because if we did, there would be a LOT of very upset marketing departments and social media personalities that would implode. It would immediately invalidate TestGunner1776 on Instagram and ruin his chances of getting free charging handles.

There ARE a handful of people out there that are doing it right, but they are a distinct minority lost in the vast Sea of Derpitism. There ARE some channels that are producing good content, but are they helping companies understand how to manage a marketing budget, or are they giving away content for free?

Manufacturers: If you’re going to give out product, just be sure of your return. Before you waste inventory, do your research on where your product is going and what you will get out of it.

New Media: If you’re going to ask for product and then take on the responsibility of providing a review, take a good look at yourself as to WHY you are doing it. Is it in the best interests of the community, or is it because you’re too cheap to buy your own stuff?

In the end, there is a NEED to review products. Technology has enabled the word-of-mouth conversation to be expanded ad infinitum, far beyond the limits of what previous marketers and advertisers faced. We all want our voice to be heard and we all want to be accepted. We are watching a shift in how marketing is done and we all want to be part of it. But let’s be honest with ourselves about WHY.

Video from Day 3 of Bullets and Bandages, a specialty medical and…

The First Year in Review

2 Comments on "Why You Don’t Deserve That Free Product"