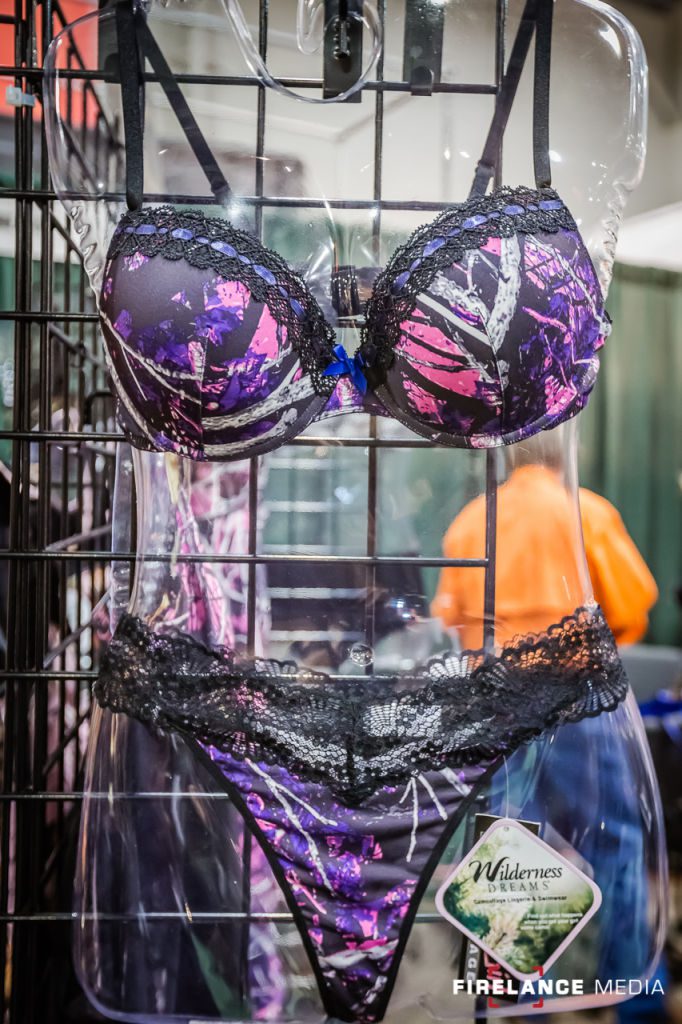 Inevitably, when you enter the massive acreage that is SHOT SHOW, you are bound to bump into products that amaze you, bewilder you, impress you, and then there are those products that make you angry.

I’m not talking about the rifle stock where you can hide a handgun, or the pistol bayonet, or the fishing lures laced with C4 (ok I may have made that one up). It’s not the bedazzled ear pro that are priced exorbitantly high for not even being electronic.

The worst thing I saw at SHOT SHOW 2015 is this. The Camouflage pattern lingerie. We’re not talking Woodland, or Multicam, or even ACU….this is unnatural pink tiger-stripe-and-leaf-and-twig pattern. Yeah, you blend.

Knowing a little about garment construction, I took a look at these little diddies and for what they are meant to be, they are assembled just fine. I’m sure the owner of the company is a nice guy. I’m sure the company is made up of nice people earning an honest wage. However, where it goes off the rails is the execution of the marketing. The catalog from Wilderness Dreams was full of very easy-on-the-eyes women wearing this year’s line of lingerie and swimwear, all in some variant of these colorways and patterns.

Where I start to get angry is when I think about how this perpetuates a certain perception that women that like guns can only feel sexy in pink and purple. That they have to have a pink gun, or be called a “mama”, or that in order to lure a man in from the woods, they have to blend in with a pile of slurpee vomit.

I know a lot of women shooters. I have worked with them, shot with them, and even dated a few. Some, I’ve even seen in various stages of undress and have NEVER seen anything like this under their clothes. In fact, if I even suggested to them that this is what would look good on them I would most likely be coughing up my own testicles. But I wouldn’t. Because I would be laughing so hard at them, I’d ruin the moment.

So this is where the industry has it wrong. The “guys need to see tits-and-ass” to sell guns mentality, coupled with a proliferation of product lines that cater specifically to women in THIS way destroys any hope of forging a powerful alliance between men and women to move the industry forward.

This is NOT me cow-towing to women trying to be some sort of white-knight on the Internet that has some deluded fantasy that if I comment enough on your photos or write enough articles praising women we will somehow slip away from my basement and you will be my warrior princess. Fuck that. If you toe the line next to me, you either perform or GTFO.

Also, I am the first to recognize that sex sells. I write this article as I stare at the Griffon Industries calendar hanging on the wall next to me. That product serves a purpose in a certain way and is unapologetic. It has its place. I get it. I have blood pumping through my veins and I’m not stupid.

But that’s not my point. There are PLENTY of kick ass women doing a lot in our business without showing skin, degrading themselves, or buying into this type of fantasy product. I could name MANY here, but it is easy to see who does it right and who is trying to make a quick buck.

The point is that we can do better than camo-soles. We can show women being strong, sexy, and powerful by creating products and images that uplift, and not put out products whose only purpose is to become fodder for your personal spank bank.

Like I said, if you like this product and it makes you feel good about yourself, fine. Buy it. Get your freak on.

But men…especially men that manufacture crap like this….if you don’t get the future of what women in this industry are doing and what it is they want, get the hell out of the way.

Soldier Systems Daily caught wind of a leak from Aimpoint on Facebook.…