Book Review – “Line in the Valley” 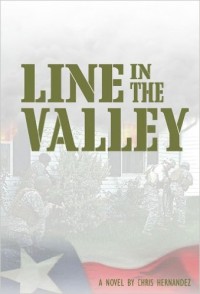 Rarely do I get a chance to sit down and read for pure enjoyment’s sake. Usually, I am catching up on news, researching product trends, or trying to better understand how we as media are performing in this business.

However, after meeting author Chris Hernandez at a recent training event, I wanted to lose myself in some fiction.

Hernandez has written several novels, the latest being “Line in the Valley,” a fictional account of terrorism on our homeland at the southern border. The main character, Nunez, is a law enforcement officer / national guardsman that is drawn into the conflict and finds himself and his platoon at the vicious front lines of the conflict very quickly.

From Amazon: “The Texas border is under attack. Police are overwhelmed and refugees flee in terror from eight small towns. Sergeant Jerry Nunez and his soldiers are ordered to retake one town from an unknown enemy. During the desperate fight Nunez discovers how inhuman people can truly be, struggles to carry on despite tragic losses, and is forced to peer into the depths of his own brutality. And he learns a lesson as painful as it is true: for a warrior, loss of freedom and honor is a worse fate than death.”

Short Review: I read the book in 36 hours. I honestly could not put it down. I read in the morning, during meals, and then before bed. There was no Facebooking, conference calls, or slacking off. I was consumed with this story. Do yourself a favor and pick up a copy.

A bit more detail: Hernandez writes with an ease that I truly enjoy. It is not densely detailed like Tom Clancy, or overly bro-tastic like Brad Thor. The conversations seemed real. There was no forced bravado or cliche alpha-male characters. The scenes that Hernandez creates are what I imagine regular guys doing when faced with extraordinary circumstances: Some step up their game, and some fold under pressure.

The situations portrayed in the novel seemed all too real given the porous nature of our border. It’s only a matter of time before the fiction in this book becomes reality. However, what drew me in even further was the political battles within the ranks of the military, as commanders jockeyed for the best career advantage rather than using common sense; or good leaders that become handcuffed by layers of bureaucracy. It was this reality that made the novel multidimensional for me.

I absolutely did not expect the mid-story plot twist (that I will not spoil here!) but it is safe to say that the clarity with which Hernandez describes the fallout of the situation is 100% believable, given the current social climate.

The book is not extraordinarily long at 300-or-so pages, and from the first few paragraphs, it keeps its momentum. At no time did I feel like I was slogging through verbiage because the story got lost and Hernandez was trying to find his way back. The action scenes were graphic at times, but written from the perspective of a guy that obviously knows his way around a gun and its potential for malfunctions.

All in all, I give “Line in the Valley” a hearty recommendation, and I look forward to reading “Proof of Our Resolve,” his first novel.

0 Comments on "Book Review – “Line in the Valley”"